Brian, of New England Stoneworks, showing a couple of different ways to cut brick while working on a chimney over at Nauset Beach in Orleans, MA. 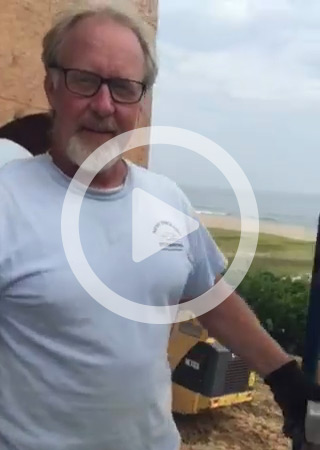 A brick mason by trade from the age of eighteen, Brian Smith built a profitable business before turning to stonework in his mid twenties. He honed his craft for a decade, studying the ins and outs of stone masonry, before launching New England Stoneworks in 1990 so that he could focus on complex projects in his some of his favorite places, like Chatham, Mass.

He started out locally, doing work in the Central Massachusetts area, in and around Worcester, where he lived with his family. After many years, through networking with various clients and fellow tradesmen, Brian decided to take a job on Cape Cod. While he was familiar with the Cape, he instantly felt a sense of comfort working on Cape Cod, creating beautiful stonework for everyone to enjoy, and has worked exclusively on the Cape ever since. He takes pride in hiring locally, and his two sons joined him and his crew when each of them had graduated from college.

Today, Brian and his crew bring over thirty years of deep, thoughtful experience to every project they take on—and the more complicated and unique the project, the better. Brian and his crew prides themselves on their ability to work through engineering challenges with architects and landscape designers. As Brian says, “We feel honored when a homeowner selects us as their stonemasons.”

The crew building a chimney at Nauset Beach in Orleans, MA 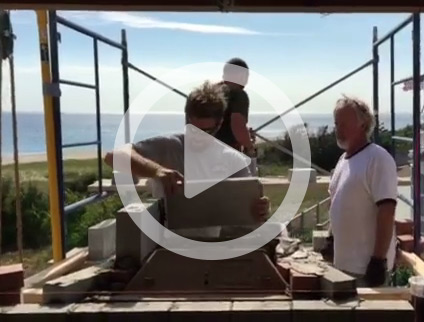 From waterfalls to fireplaces… columns to archways… patios to staircases, Brian infuses each project with his understanding of stone masonry. Committed to preserving the stone’s natural beauty, he draws his inspiration from nature as well as classic stonework structures like Machu Picchu in Peru, where he recently traveled.

Brian helps homeowners choose an architect or landscape designer, and he provides these professionals with input on the conceptual designs. He fabricates the majority of stone himself, something that’s unheard of in the stone trade.

Brian is passionate about stonework, and he brings this passion to every job, every day.